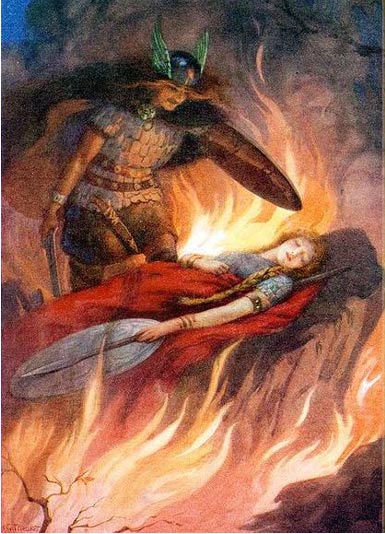 Blood shone at me from the red light of the crystal, and when I picked it up to discover its mystery; there lay the horror uncovered before me: in the depths of what is to come lay murder. The blond hero lay slain. The black beetle is the death that is necessary for renewal; and so thereafter, a new sun glowed, the sun of the depths, full of riddles, a sun of the night. And as the rising sun of spring quickens the dead earth, so the sun of the depths quickened the dead, and thus began the terrible struggle between light and darkness. Out of that burst the powerful and ever unvanquished source of blood.1

The blond hero is Siegfried, the old Germanic hero figure of the Nibelungenlied (The Song of the Nibelungs). This hero, for Jung personally, represents his penchant for intellectual thought, systematizing, and analysis, his “hero ideal of . . . efficiency.” This needed to be sacrificed in order for the spirit of the depths to lead him further on his journey. Herein lies the “murder.” The black scarab beetle is the Egyptian symbol of rebirth and regeneration. The beetle devours that which is “transitory – the volatile element in alchemy . . .” and contributes  ” . . . to moral and physical regeneration.”2

The sun of the depths we have already spoken of. It is the Black Sun. This is the exact opposite of what we usually think of as the Sun. There is a tremendous battle between darkness and light which produces an unlimited “source of blood,” which is also a symbol of sacrifice. With ancient peoples, a blood sacrifice was the most precious offering of all. The Light/Darkness paradox is the fuel that powers rebirth and regeneration, hence the mysterious riddles of the Black Sun.

Depths and surface should mix so that new life can develop. Yet the new life does not develop outside of us, but within us. What happens outside us in these days is the image that the peoples live in events, to bequeath this image immemorially to far-off times so that they might learn from it for their own way; just as we learned from the images that the ancients had lived before us in events. Life does not come from events, but from us. Everything that happens outside has already been.3

The unconscious and the conscious minds should intermingle in order that something new should arise within us. This is what Jung’s descent is all about. He is experiencing the preliminary images of what is to come, which is a full-blown intermingling, an apotheosis, so to speak. Things of the depths and things of the surface (unconscious and conscious) “should mix so that new life can develop.” Jesus said, “Neither shall they say, Lo here! or, lo there! for, behold, the kingdom of God is within you.“4

The images of “outer events” are written in the collective unconscious, or something like the Akashic Records, in order that future peoples might learn from them “for their own way; just as we learned from the images that the ancients had lived before us in events.” These things have “already been,” but we have access to them via the collective unconscious. This almost sounds like some sort of psychological “Project Looking Glass technology,” but I believe it is more like the memory systems of Robert Fludd and Girordano Bruno.

Therefore whoever considers the event from outside always sees only that it already was, and that it is always the same. But whoever looks from inside, knows that everything is new. The events that happen are always the same. But the creative depths of man are not always the same. Events signify nothing, they signify only in us. We create the meaning of events. The meaning is and always was artificial. We make it.5

We create the meaning of events. An interesting statement. External events have no innate meaning. Meaning only comes when we provide it. It arises from the deep, inner meanings which are innate to us. The mind is not a tabula rasa. We are provided with a collective archetypal structure at birth. An event does not have a single meaning. There are limitless possibilities because, as Heraclitus said, “One would never discover the limits of psyche, should one traverse every road–so deep a logos does it possess.”