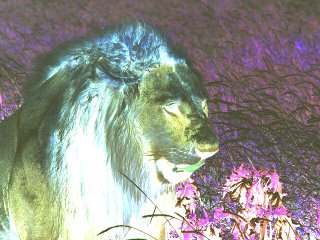 Continuing with my comparison of the images of transformation in Faust and Zarathustra, I would now like to see if I can discover whether Faust exhibits the characteristics of Zarathustra’s lion. Zarathustra says:

But in the loneliest desert the second metamorphosis occurs: the spirit here becomes a lion; it wants to capture freedom and be lord in its own desert.

This transformation comes because of solitude. Zarathustra had traveled to the mountains where he lived alone for ten years. The seeker of truth who carries the burden of uncertainty will eventually need solitude. Not actually literal solitude, but a separation in thought from those who still adhere to mainstream modes of thought. Only in solitude can genuine creation be brought forth.

By his decision to abandon discursive reason and learning, Faust has separated himself from the mainstream. He is no longer a participant in the “herd mentality.” His thoughts are now flying to and fro, searching for possible ways to fulfill his longing for truth.

A primary step in his development is the resolve to begin practicing magic. The important point is not that magic is necessarily a viable path to truth, but that Faust makes a choice which is not influenced by mainstream thought. Choosing something which belongs to him personally elevates him to a new level.

After making the pact with Mephisto, which he enters into willingly, Faust passes over into the realm of the lion. He now experiences a kind of freedom that is strange to him. He even finds it a bit lewd (e.g. the drinking at Auerbach’s wine cellar), but this is also part of the process. According to Nietzsche, the Dionysian and Apollinian forces must be balanced, and then transcended. This involves an interaction with one’s dark side, which Mephisto, and all that he offers, represents.

The lion is a mighty, noble warrior, and a vicious killer. It is noble in the sense that it craves freedom. It desires to create its own freedom, but it must kill to get it. Later in the story, Faust kills in an attempt to do away with obstacles which stand in his path. He puts to death old ways of thinking, which is what the killing symbolizes. He wants Gretchen at all cost. He will stop at nothing to get her. Gretchen represents the goal which he seeks, i.e., self-realization/individuation.

Who is to be the lion’s victim?

It seeks here its ultimate lord: it will be an enemy to him and to its ultimate God, it will struggle for victory with the great dragon.

The lion cannot create new values. However, its might is needed to capture freedom for itself. After the dragon has been mauled by the spirit of the lion, what then? The lion must understand that now there is no guiding hand of a transcendental God, or the firm foundation of a realm of absolute Ideas. There is no external authority. Now, the lion is alone; it is responsible for itself. There are no more laws, no more duties for it to bear. Is this not the greatest burden?

Faust is also alone in his responsibility. By making a pact with Mephisto, he willingly relinquishes his claim to salvation through Jesus Christ. It is up to him to keep striving, to keep creating his own freedom, even though he is encountering a side of himself which is very sinister. Now, in order for Faust to be able to create new values for himself, he must undergo yet another transformation. Next, we will look at Zarathustra’s image of the child.