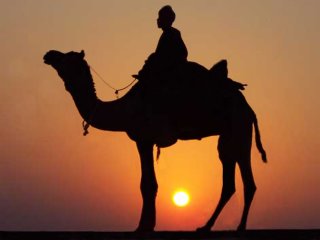 I will begin this article examining a few metaphors from Nietzsche’s Zarathustra, particularly the images of the Three Metamorphoses, and compare my interpretation of them with several statements in Faust. The primary point in doing this is to compare Faust’s transformation with Zarathustra’s three-fold process of becoming.

Let’s look at a statement by Zarathustra:

I name you three metamorphoses of the spirit: how the spirit shall become a camel, and the camel a lion, and the lion at last a child” (Hollingdale translation).

What does the image of the camel mean? A camel is a beast of burden. When commanded, it kneels down to accept heavy loads. It seems to possess a sense of duty in bearing what it is ordered to bear. It can go days through the desert without water. The camel-image seems to refer to the human tendency to confront that which is difficult for us out of a sense of duty. We do not will what we do at this stage, but do “what we ought to do.” We are not free to make our own decisions because we give our will over to what we believe are our duties. Nevertheless, by doing “what we ought” we challenge ourselves, paving the way for further refinement.

Can we find a stage in the life of Faust where we see such a tendency? I think so. Prior to his pact with Mephisto, Faust is bound by his duties as Master and Doctor. He bears the weight of teaching his students truth, but yet he knows in himself that he can never touch certainty. In Night, he says,

. . . for nearly ten years I have led my young students a merry chase, up, down, and every which way– and find we can’t have certitude.

Here we find Faust in the latter stages of the camel. For most of his life, he has carried the heavy burden of duty on his back, in the belief that, through his scholarly studies and his teaching, he would truly discover the inner workings of the universe. He experiences deep despair, which is, however, a precursor to transformation:

. . . I get no joy from anything, either, know nothing that I think worthwhile, and don’t imagine that what I teach could better mankind or make it godly.

Later in the story, Faust tries to commit suicide, but, upon hearing the music and singing of Easter morning, desists.

What is the heaviest thing, you heroes? so asks the weight-bearing spirit, that I may take it upon me and rejoice in my strength.

In bearing the heaviest burdens, the camel-spirit becomes lofty in its strength. In comparison, Faust has become a bit arrogant in his quest for truth, believing himself to be superior to his peers in knowledge:

I well may know more than all those dullards, those doctors, teachers, officials, and priests. . .

Arrogance is a mode of thought which is normal for one who has undertaken to know the secrets of the universe. But it must not be allowed to dominate one’s thinking. If permitted to fester, it will halt the process of becoming:

Is it not this: to debase yourself in order to injure your pride? To let your folly shine out in order to mock your wisdom (Zarathustra)?

Zarathustra asks if it is not a heavy burden “to feed upon the acorns and grass of knowledge and for the sake of truth to suffer hunger of the soul?” For someone who has devoted much time to the search for truth and understanding, it is a very heavy burden to discover that all our so-called wisdom and knowledge is fleeting. The seeker longs for a person, a book, or some other foothold that can lead him or her to a bedrock of truth. It is burdensome because one discovers there is no such absolute foundation. One must consume what small morsels of truth one can find on the cold, damp ground. One must suffer hunger of the soul when the understanding comes that all so-called truths are really uncertain.

This is exactly what Faust is feeling when he decides to begin practicing magic. Now, he is on the very threshold of transformation.