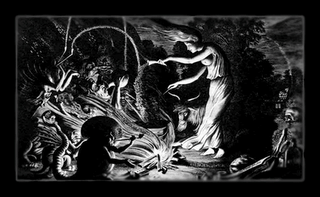 After his pact with Mephistopheles is complete, Faust is plunged into a dark world populated by some very strange characters. It’s a lot like the real world, I suppose.

Their first stop is Auerbach’s Tavern, where they encounter a lively drinking-party. This is an interesting scene, but, in this article, I wish to deal with their visit to the witch’s kitchen. Here is the description of the scene given to us by Goethe:

A low hearth with a cauldron on the fire; various figures appear in the vapor rising from it. A She-Ape sits beside the cauldron, skimming it and watching it, lest it boil over. The Buck and Young Apes are sitting beside her and warming themselves. Ceiling and walls are decorated with the most grotesque utensils of sorcery.

This certainly seems like a strange place to pay a visit. The symbolism, however, is very rich and enlightening. First of all, in this scene I think Goethe is psychologically preparing the reader for what will soon transpire between Faust and Gretchen. What we will see in the witch’s kitchen are symbols which coincide with the darker aspects of Eros.

There are several interesting images here. The cauldron could be the unconscious mind, and the vapors rising from it could be its contents rising up into consciousness. It makes sense that monkeys would tend the pot, since “scimians generally symbolize the baser forces, darkness, or unconscious activity” (Cirlot 212). There could, however, be a double-meaning here. In China, monkeys are said to bring success and good health (ibid.). Of course, as we know, the Faust story is replete with this kind of dualism.

I think it is significant that the She-Ape is watching the cauldron, “lest it boil over.” Does the She-Ape correspond to some sort of sentry in the psyche who watches over the rising “vapors” lest they bring about psychological imbalance (a boiling over)? Perhaps the She-Ape is the same kind of image as the witch.

Traditionally, the witch has been associated with what Carl Jung called the “negative anima.” Jung believed the psyche is composed of both male and female elements. According to Jung, the anima (Latin for “soul”) in its darker aspects has been metaphorically presented in many stories throughout history as a witch (e.g. Hansel and Gretel). Encountering and integrating one’s anima (for a man, anyway) is the beginning of the development of the soul. One must face the negative element as well as the positive so that one may attain individuation, according to Jungian theory.

Upon entering the witch’s kitchen, Faust is confronted with evil. Here is the paraphernalia of Satanism and sorcery. For a European who has been raised in the Christian Church, these things represent the ultimate blasphemy against God. But, if we take Jung’s ideas as worthwhile, this may have been just what Faust needed to begin his journey to self-knowledge. I suppose this is all similar to Nietzsche’s idea about the Dionysian and Apollinian elements being incorporated. Jung must have gleaned much from Nietzsche.