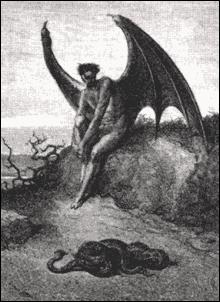 After Faust has exorcised the spirit from the dog, a figure steps from behind the stove, clad as a traveling scholar. It is interesting to note here that Mephistopheles appears in the guise of a scholar, especially since we have learned that Wagner represents that which Faust has rebelled against, namely, discursive reasoning and learning. Why does Mephisto adopt such an appearance? I think he is portrayed this way because he carries Faust’s shadow, i.e., the negative side of his personality. Even though the figure of Mephisto conveys much more than simply Faust’s distaste for pedantry, this is, nevertheless, an initial point for recognizing and understanding what Mephistopheles means in the story.

Just prior to the exorcism, there are spirits outside the study which make an interesting statement concerning Mephistopheles:

For he has already done
Much to profit us, each one.

If Mephistopheles is supposed to be the Devil, as in Christian jargon, then why do the spirits say he has been of great profit to them? What he represents is not just profitable to the spirits, but to Faust as well. For an explanation, we need to return for a moment to the Prologue in Heaven to examine a statement made by the Lord to Mephistopheles:

Mankind’s activity can languish all too easily,
A man soon loves unhampered rest;
Hence, gladly I give him a comrade such as you,
Who stirs and works and must, as devil, do.

Herein is contained Goethe’s explanation for evil in the world. He believes that good and evil are two equally opposing forces. As in Hegel, there is no development without both poles striving against each other. Man languishes, without conflict to keep him developing, to keep him striving. If there were no friction in our lives, we would never gain self-knowledge, and we would never develop.

Mephistopheles is the spirit of negation. He represents the contradictions, the rejections, the refusals, and the denials within us all. He is the archetypal shadow, in Jungian terminology.

Nietzsche differentiated between the Apollinian and the Dionysian. He charged Christianity with overemphasizing the Apollinian. He and Goethe were both saying that Western culture has ignored the dark side of human nature. Mephistopheles is really the dark side of the Anthropos, the divine original man of Western society (Christ).

Thus, what does it mean, in Western mythology, to sell your soul to the Devil? It is much the same thing as what Nietzsche meant by his admonition for us to make room for the Dionysian elements. It is the same thing Carl Jung meant when he suggested we get to know our shadow, thereby allowing commerce between the conscious and unconscious.

During the conversation regarding Mephistopheles’ name, the latter describes a Manichaean-like cosmogony:

But I’m part of the Part which at the first was all,
Part of the Darkness that gave birth to Light,
The haughty Light that now with Mother Night
Disputes her ancient rank and space withal,
And yet ’twill not succeed, since, strive as strive it may,
Fettered to bodies will Light stay.

This is clearly a distortion of the Biblical account of creation. Whereas in Genesis, light is created by divine fiat, here light is born of “Mother Night.” Mephistopheles identifies with the Darkness, saying he is but a part of it. Again, I think this points to his role as shadow-figure and negator. Originally, all was one. This could point to a time when consciousness was undifferentiated. At some point in history, a “fall” occurred, i.e., consciousness fragmented from unconsciousness. This could have been when the Greeks began overemphasizing the Apollinian, as Nietzsche described in The Birth of Tragedy. Or it could have happened when mankind gained an awareness of right and wrong. Regardless of how it happened, what we now see is a conflict of opposites.