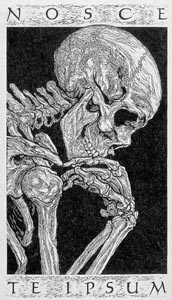 Continuing with Night, Faust has just finished conversing with Wagner, a pedant who represents the kind of learning which the former has thoroughly rejected. Faust refers to him in one place as “Earth’s most miserable son.” I believe, however, that he may be referring to his own misery as well.

In the story of Faust, a groundwork is being laid, unbeknownst to Goethe, for what we today call existentialism. This is a broad subject, which would require more than a mere blog article to explicate. I will try to deal with one or two points of similarity. The following passage seems to be an appropriate place to begin:

In that holy moment I seemed to be
So little, yet so very great,
Thou didst thrust me cruelly
Back into the uncertainties of human fate.
Whose teaching shall I heed?
What shall I shun?
Shall I obey each inner urge?
Alas! Our deeds, as well as sorrows, one by one
Clog the current of our life’s deep surge.

This passage comes just prior to Faust’s close encounter with suicide. I believe he is referring to the Earth-Spirit when he says, “Thou didst thrust me cruelly . . .” Just before Wagner knocked on the door of his study, Faust had two very powerful experiences, which I have already discussed (the Macrocosm and the Earth-Spirit). There is a very curious exchange with the Earth-Spirit, where the spirit says, “Thou resemblest the Spirit thou canst understand–not me!” Faust then says,

Not thee?
Whom then?
I, image of the godhead!
And not like thee?

What does the spirit mean? Faust is quite confused by this statement. His insatiable desire for knowledge has brought him to a point where he feels elevated above the pedantic scholar (someone like Wagner), and perhaps equal to Nature itself. He has felt a kind of mystical union with Nature. Perhaps the “spirit which thou canst understand” is none other than Faust himself. Perhaps the Earth-Spirit is trying to get him to see that self-knowledge is the most important kind of knowledge one can ever attain.

We know from Faust’s own words that his vision was at its height at the point of Wagner’s knock. Has Faust realized the importance of what Socrates knew so well, i.e., know thyself?

Returning to the main passage first quoted, I definitely think Faust is referring to his encounter with the Earth-Spirit. He has learned that he cannot fully transcend Nature, i.e. he cannot completely understand the inner workings of Nature. This revelation upsets Faust’s idealized presuppositions of what it means to know. It makes him feel as if the universe has cruelly mistreated him by casting him into a sea of uncertainty. He is unsure as to which teachings to follow. Furthermore, his ethical foundation has been destroyed; he is uncertain about good and evil. Faust considers this a horrible fate. He seemed to think that if he could just get in tune with Nature, all would be well. But the words of the Earth-Spirit catapult him into a state of despondency.

Uncertainty, doubts concerning one’s existence, Angst, and a relative ethic: these are a few of the catchwords of existentialism. These experiences, however, produce self-knowledge, which is much more important than the quest for transcendence. The Earth-Spirit is trying to show Faust that he is better off trying to understand himself than the entire cosmos. These same topics would later be dealt with quite thoroughly by Nietzsche, Kierkegaard, Sartre, et al. I tend to think that Goethe had much to do with the way their existential self-examination began.