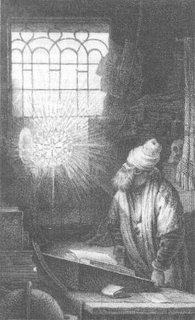 This article continues with the discussion of Faust’s search for a new kind of perception, and the role of Nature in the story. Faust experiences a camaraderie with the moon that opens up new vistas of understanding:

Ah, could I on mountain height,
Roam in thy softly tender light,
O’er the fields at twilight trail,
Drifting with spirits of hill and dale;
Then freed from knowledge and its pain,
Bathed in thy dew, my health regain.

There is an experience one can have with Nature that is unexplainable. It can only be hinted at in poetry. Goethe understood this very well. He knew the link between Nature and the mind of man. He was aware that such an experience could free one from the fetters of discursive reasoning, which tended to reduce the quest for truth to rationality and logic. Imagination plays a key role in the higher perception. Faust dreams of being able to roam the mountain peaks of the moon, in the soft, tender light. To skip through hill and dale at twilight, with spirits at his side, and finally being baptized in the moon’s dew, which is regenerative. To truly study a plant, a rock, or the planets, we must use our imagination to get at the inner truth of the thing. Measurement is fine, but we should not stop there.

When I studied Heidegger in college, I learned about a kind of thinking that belongs to the Being of a thing. In this belonging-together of being and thinking, thinking thinks on being. It does not evaluate and analyze a thing; it experiences it as that which emerges out of hiding. This seems to be the kind of perception that Faust is looking for.

The vision of the moon seems to be the first of several intuitive perceptions which Faust experiences in the early stages of the tragedy. Next, he encounters the sign of the Macrocosm.

Ha! At this one burning glance what ecstasy
Courses through my senses once again!
I feel a youthful holy joy of life,
Quivering through every nerve and vein!
Was it a god who wrote this sign, which stills
My inner tumult, fills
My troubled heart with joy,
And with mysterious force reveals
The power of Nature which about me steals?

The sign of the Macrocosm is “a diagram of the organization of the cosmos in terms of the four elements, the arrangement of the planets, and the relationship of human, natural, and divine spheres” (Brown 53). It is very similar to mandalas used in Tibetan Buddhism, and other parts of the world. It is a symbol which has obviously touched Faust very deeply.

In the sign, Nature encompasses everything and everything is Nature. There is an opposition between Nature and the anima mundi. This sign hearkens back to the opposition we saw in the Prologue in Heaven, where Raphael’s harmony and Michael’s storms were synthesized. There is no doubt now that Faust is leaning toward a pantheistic view of the universe. It is the “power of Nature” which fills his heart with joy and frees him from the chains of a strictly systematic approach to truth. It is more than just an experience of universal order. Faust claims the sign points to “Creative Nature.”

At the end of the vision, Faust calls out for “illimitable Nature.” This is very different than simple allegorizing of Nature’s beauty. Faust seems to view Nature, not as a stepping stone to a transcendent deity, but as God (whatever we may mean by that) here and now before our senses.