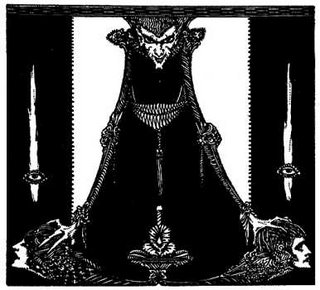 Continuing with the Prologue in Heaven, the archangel, Michael, utters these words:

And rival tempests roar and shatter,
From sea to land, from land to sea

Here, I think we have yet another picture of man the microcosm. Goethe is presenting a view of the nature of man that would later become popular in the guise of Freud’s psychoanalysis, and Jung’s analytical psychology.

Goethe is describing man as a being whose life-experience is characterized by “rival tempests.” The human experience is one of conflict, of that there is little doubt. The greatest philosophers and poets have realized this. Just as sunny days give way to thunderstorms, hurricanes and tornadoes, and these, in turn, give way again to sunny days, the human being experiences an incessant procession of pain and pleasure, peace and turmoil, love and hate, calm and rage, etc. Inner forces are constantly ebbing and flowing. Tomorrow may bring a formidable bout with depression, only to find oneself, the next day, wondering why depression had gained the ascendancy.

In the age of Goethe, many believed that the light of Reason would lead man down the primrose path to Utopia. They failed to understand that humans also have a dark side, or a “Shadow,” as Jung put it. The polar opposites, which are innate in man, are at war. This is what Goethe was trying to tell his contemporaries, but the many failed to heed the warning. It would take several bloody wars, and millions of lives being snuffed out, to mitigate the enthusiasm of Enlightenment thinking.

The manner in which storms travel from sea to land, and from land to sea, leads me to think of how my own tempests seem to ebb and flow from consciousness to unconsciousness. A hurricane, for example, when it comes ashore, is usually very destructive. However, when it once again moves out to sea, we forget about it, and it eventually dies out. Isn’t this the way it is with an inner storm? We are conscious of turmoil, depression, rage, etc. But, inevitably, the disturbance flows back into unconsciousness, where it either lies dormant for a time, or simply dies.

And, raging, form a circling fetter
Of deep, effective energy.

This passage, I think, is very important. The path of both inner and outer storms is cyclical. Actually, I believe Goethe would say that Nature, as a whole (microcosm/macrocosm), is cyclical. The give and take of the polar opposites produces a “circling fetter,” a circular chain, of energy. This sounds very much like “Chi” in Taoism. I am also thinking of a Gnostic symbol which has enjoyed some popularity on television (X-Files and Millennium), the Ouroboros. The Ouroboros is a snake biting its own tail. According to Cirlot, “the Ouroboros . . . is symbolic of self-fecundation, or the primitive idea of a self-sufficient Nature — a Nature, that is, which, ala Nietzsche, continually returns, within a cyclic pattern, to its own beginning” (Cirlot 247). From what I have read about Goethe, he was most definitely a man who believed in self-fecundation and self-sufficiency. The references to cyclical paths of self-realization are many. Another which comes to mind is the Zen Circle.

The main point which I think Goethe is trying to make is that the experience of humankind is not linear, as most Westerners like to think. Also, it is not one-sided, with Reason as our helmsman. Rather, our path is one which ebbs and flows cyclically, sometimes dark, sometimes light, sometimes calm, sometimes tempestuous. Self-fulfillment can only come when we recognize and accept these aspects of ourselves.