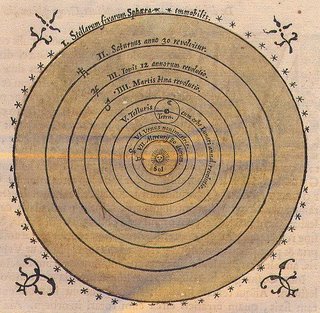 And swift beyond where knowledge ranges,
Earth’s splendour whirls in circling flight;

In contrast to the geocentric symbolism of Raphael’s speech, Goethe alludes to the heliocentric view by having Gabriel speak of the earth “in circling flight.” As I mentioned in Part I, I don’t think the mention of cosmology is meant be taken literally. As I’ve been reading about Goethe’s intellectual life, I am discovering that he was very much in tune, not only with Romanticism, but also with the Renaissance, especially those thinkers who exhibited an uncompromising belief in individualism, and in human potential. This image of the earth, in all its splendor, whirling around the sun, seems to represent the plight of the individual who searches for truth. Just as the earth circumambulates the sun, we, as truth-seekers, seem to go around in circles in our journey. In Jungian psychology, much emphasis is placed on the alchemical process, circumambulatio, or the “circumambulation of the self.” Jung believed that the quest toward individuation was circular, which is why many cultures create mandalas, or circular drawings, to symbolize the process of self-realization. Goethe’s image of the earth, whirling around the sun, perhaps in search of light, is a wonderful metaphor for the circumambulatio.

Another thought comes to mind about this image: perhaps Goethe is trying to relate how humans are free to roam where they may, but that this freedom is determined by a certain destiny which must be fulfilled (the circumscribed orbit of the earth). The Romantics believed in unfettered freedom of the human will; I am wondering whether Goethe may have been trying to mediate this notion by saying, “Yes, we are free, but it is a freedom which is circumscribed, not absolute.” This would certainly be in agreement with his belief in the conjunction of opposites.

Goethe seemed to be of the opinion that Nature and mankind were meant to be in harmony. The passage above reminds me of the Hermetic doctrine, As above, so below, i.e., the connection between the microcosm and macrocosm. The image of the solar system is the macrocosm, but there is a parallel image already alluded to above, i.e., man as microcosm. Man is a “universe in miniature,” according to this doctrine. The idea is found in symbolic traditions all over the world, especially in the esoteric teachings of the Renaissance. Goethe, who had a fascination with esoteric philosophy, must have incorporated the idea into his work.

The passage subtly implies that Goethe, as a participant in the Romantic movement, believed in the individual and his freedom, albeit circumscribed. Also, because he was using concepts from alchemy and other esoteric philosophies, it shows that he clearly rejected institutional Christianity. Finally, I think Goethe could easily be described as a Renaissance man as well. His interest, again, in individualism places him alongside such luminaries as Pico della Mirandola and Da Vinci, who were also interested in esotericism.