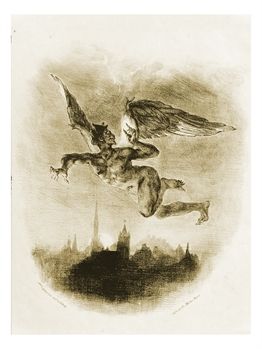 Goethe’s Faust is a deep, deep tale, wrought in the bowels of the collective unconscious. For years, it has fascinated me. The following commentary came to me while musing on the great man’s work. This will be the beginning of several installments on Faust that I will post over the next few weeks, as I attempt to peer into the mind of Goethe.

In the Prologue in Heaven, Goethe has the angel, Raphael, saying:

The sun is chanting his ancient song,
In contest with the brother spheres

Goethe is setting the stage for the conversation between God and Mephistopheles. The first line above refers to the Pythagorean teaching of “the harmony of the spheres,” where each sphere in the solar system emits a musical tone, which harmonizes with the tones of all other spheres, forming a beautiful, harmonious music. In the second line, we see that Goethe is veering away from this notion of a harmonious universe, for the sun’s song is at odds with the other spheres’. It is as if the sun wants to sing the prettiest song so that he may be revered above all the other spheres. Thus, the Heaven where God and Mephistopheles will discuss the man, Faust, is not the orderly, harmonious universe of orthodox Christianity. Rather, it is a universe of contention, where the opposites are in eternal conflict.

The next few lines read:

Rolling with thunder steps along,
Down the predestined course of years.

This passage, compared with the previous one, shows that contention of the opposites is a major theme. Above, we saw that the music of the spheres will not be harmonious. But, even though there is no concord between the spheres, the sun is rolling down a course of “predestined years.” Here is an element of orderliness. Perhaps Goethe is saying that, even though we live in a contentious universe, there are destinies to be fulfilled, there are paths of harmony which may be discovered.

Goethe has the sun in motion, thus presenting a geocentric planetary system. Of course, this was the accepted view prior to Copernicus’ heliocentric theory. I doubt very much, however, that Goethe is giving us a cosmology lesson, especially since the geocentric theory was in much disrepute by his day. Could it be that the sun is a metaphor for the ultimate fulfillment of man’s inner struggle, or perhaps a symbol for the light of truth? There is precedent for such solar-symbolism in alchemy, a subject which Goethe was much involved in.

In alchemy, Sol represented the gold which the alchemists sought to make, as opposed to Luna, or the base metals. Many now believe that the alchemists were actually describing a process of self-transformation. The alchemical processes of the Middle Ages and the Renaissance, are really, according to some, psychological processes which we pass through on the way to self-realization. The gold, or the sun, corresponds to this state of fulfillment.

His presence gives the angels might,
Though fathom it none ever may;
And Thy sublime works still are bright
With splendor of Creation’s day.

Raphael ends his speech with the idea that the contention of the opposites will never be fully understood. The universe, regardless of how mysterious it may be, is still a marvelous place. The presence of opposition is really a good thing. As with Hegel, negation is something that is quite necessary in our world. Without negation, there is no upward movement.

One thought on “Comments On Faust Part I”